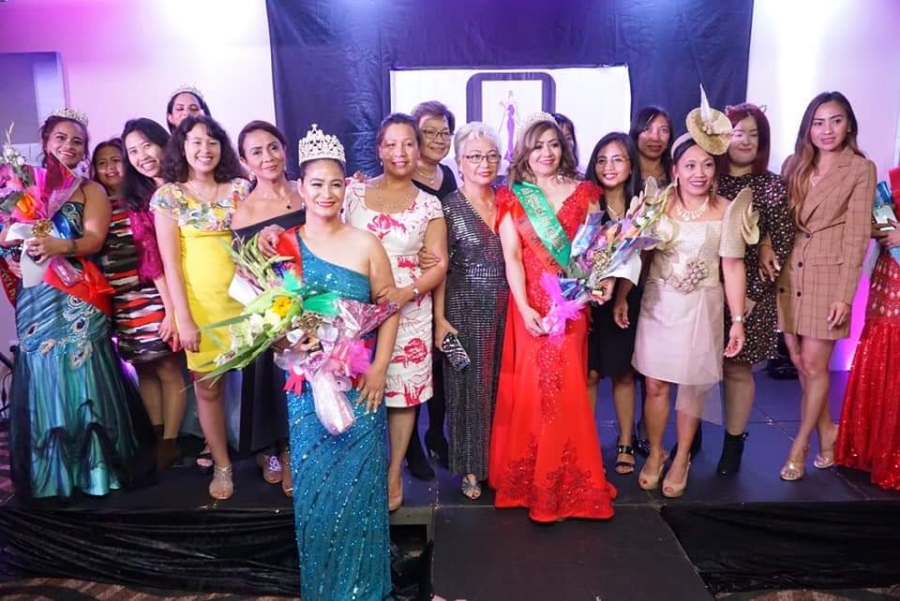 This yearly event was created by the Asian Group IW and the evening commenced with National Customs before showcasing an amazing range of National Costumes.

The evening continued with a lovely buffet meal, speeches, judging and the crowning of the winners.

This national holiday is celebrated in Bali with various festivities including parades, community events and cultural and art exhibitions. Indonesia proclaimed her Independence on August 17th 1945, this year Indonesia celebrates its 74th year of the Proclamation of Independence. Every year this historic event is celebrated with numerous exciting events throughout the nation that are aimed at enhancing Unity in Diversity.

For further information Equals IW has a case study in pdf format (435k). 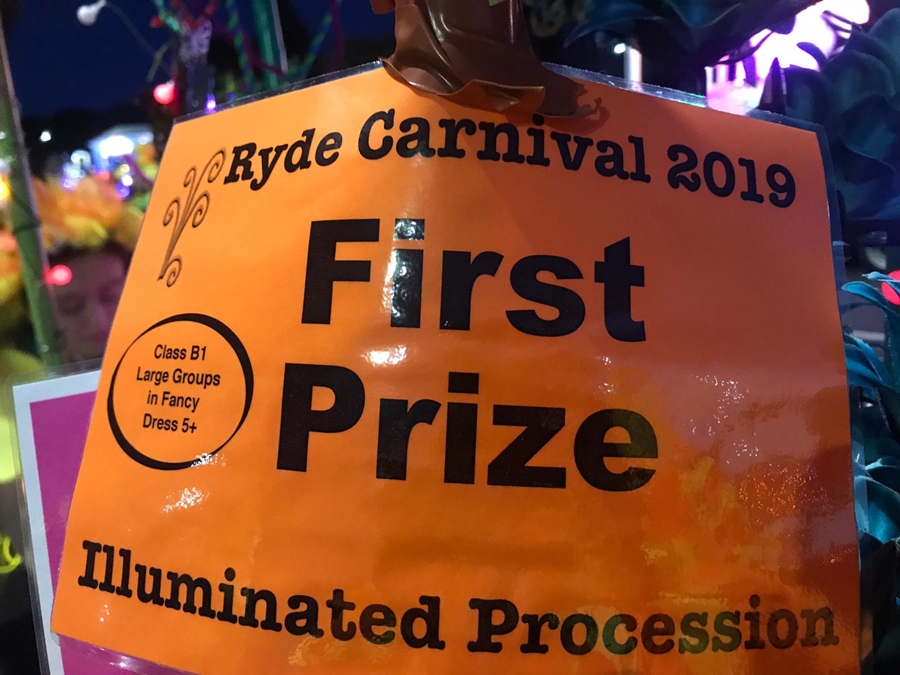 The team’s entry in this year's Ryde Illuminated Carnival brought joy to those watching the colourful procession through the streets. The costumes were based on woodlands, forest and wildlife associated with Bouldnor Forest which is located near Yarmouth on the Island. The team’s entry featured Kimmi the ‘Great Crested Newt’ and the included a mobile music unit transformed into a mobile forest. The woodland themes on the music unit were hand painted with support for the entry by the Equals IW teams sponsor MCEnhancement. 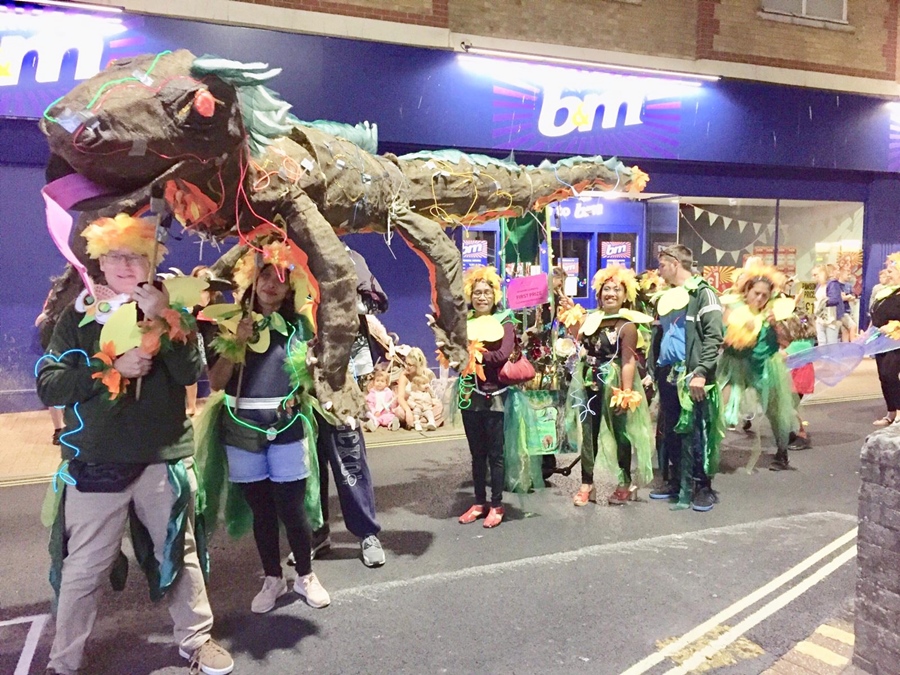 Kimmi the ‘Great Crested Newt’ Lights Up the Streets of Newport.

Equals IW Friendship Group (Women Group) including husbands, children and friends represented Equals IW stepped out to build on their Mardi Gras success over a number of years to enter their first Island Illuminated Carnival, Newport’s.

The team’s entry in this year Newport Illuminated Carnival brought joy to those watching the very colourful carnival through the streets of Newport. The costumes were based on woodlands, forest and wildlife associated with Bouldnor Forest, located near Yarmouth on the Island. The team’s entry featured Kimmi the ‘Great Crested Newt’ and the team entry was complimented with a mobile music unit transformed into a mobile forest. The music unit woodlands themes were all hand painted by three artists. The unit was made possible by the Equals IW teams sponsor MCEnhancement.

Bouldnor Forest is the focus of the Equals IW involvement with the  2019 Isle of Wight Mardi Gras event. Our Mardi Gras entry within the 'Woodlands' section of the parade has to reflect the biosphere of the reserve especially in the costumes.

Bouldnor Forest nature reserve is full to the brim with exciting wildlife. Red Squirrels leap from branch to branch and unusual birds such as Tree Creepers and Bullfinches flit between the trees. Why not download a wildlife spotter sheet before you go and see how many species you can identify?

Unusual birds such as Crossbills and Goldcrests are abundant, and during the spring a host of heathland rarities brighten the restored clay heaths, you will see Pale Dog-Violet, Heath Dog-Violet and Cyperus sedge blooming along the coastal path. Down on the beach you can uncover the Isle of Wight’s prehistoric past. Look closely and you may find small fossils among the pebbles. Once you’ve finished your archaeological activities, you can look out across the Solent and take in the stunning views of the New Forest coast.

Discover exciting wildlife in this fascinating reserve with a prehistoric past. The Pine Forest, Heathland, Cliffs and Sea Grass beds provide homes for plentiful wildlife. Buildings remain from the site’s former use as a naval training base, are evident among the trees and are now used as an Education Centre. Wander along the forest tracks between the Pine trees to look and listen for unusual birds such as Crossbill, Goldcrest and Raven. You may glimpse the iconic Red Squirrel leaping from branch to branch. With no introduced grey squirrels on the Island, their smaller cousin thrives here.

In spring along the coast path, discover Heathland rarities that brighten the restored Clay Heaths, such as Pale Dog-Violet, Heath Dog-Violet and Cyperus Sedge. By summer, Bell Heather is in its full glory. Look out for the strange parasitic Dodder, it has no leaves, only pink thread-like stems and dense heads of white and pink flowers.

The reserve is 38 hectares in size. The surfaced Forestry tracks are usually dry. Unsurfaced public footpaths can be muddy when wet. The coastal path is on a gentle slope. There is one wide gate to enter the reserve and one within the reserve.

Bouldnor Forest is one of our most important Flagship Pond sites. It is the only known site on the Isle of Wight for the delicate aquatic fern Pillwort Pilularia Globulifera. This small endangered fern loves the muddy edges of grazed ponds which dry down over the summer and fill in the winter. Unfortunately, pillwort has not been recorded on the site for some years and re-establishing and preserving what could potentially be the last stronghold for this plant on the island is of high importance.

The ponds at Bouldnor are also known to host other species of interest including protected Great Crested Newts Triturus Cristatus, Common Toads Bufo Bufo, numbers of which are thought to be declining across the UK, and several freshwater green algae known as Stoneworts.

The Isle of Wight Council has published the Adult Community Learning programme for Spring 2018.

Some of the courses are free (fully funded) but all are good value and an excellent way to gain skills and meet like minded people.